You’ll love this ‘charming’ little book which is packed full of hidden gems and contains a seriously important message. It’s been described as being like Alice in Wonderland with Zen sutras.

Don’t be misled by the fact that the characters are clowns, monkeys and bears etc., this is simply to make it more fun to read - but the underlying message which is present even in the idiotic parts is seriously important and certainly no joke.

The very fact that you are reading this page is an indication that this book was written specifically for you and you will certainly identify with many of the points brought into question - this is no coincidence! Trust your intuition!

Throughout much of the story there are several quotations from “A Course in Miracles”, these show the significance of the various points in relation to the world in which we live. If this story does nothing more than encourage you to read the above, then its purpose will have been achieved.

But you may also want to look further into the “Conscious connected breathing” (rebirthing) technique which Bonjo the Clown is taught herein – you’d be wise to do so. This can be mastered quickly and easily with life changing results.

If the story also makes you laugh or smile, then that’s my bonus.

"There are many answers you have already received but have not yet heard. I assure you that they are waiting for you." - A Course in Miracles

More Information of The Golden Sphere

The Golden Sphere is the story of Bonjo the Clown, who like everything else in his world is a gold charm but unaware of his ‘Goldness’.

Being a clown, Bonjo was unable to resist the opportunity of gluing poor Busby to a rock after discreetly feeding him a strong laxative. Leaving Busby to his fate Bonjo then had to negotiate a dangerous swamp which he fell into after tripping over his oversized feet. This led to an interesting near death experience, but he was eventually saved by thousands of worms, two of whom accompanied him for the rest of his journey.

When he finally reached the Golden Snake Temple he found that the Wise Monkeys weren’t quite as he’d expected and he was severely tested before eventually being taught the meanings of ‘Speak, Hear and See no Evil’. And before his final lesson he was also taught to ‘breathe energy’ (conscious connected breathing, or ‘rebirthing’) which enabled him to realise his Goldnesss and become aware of the present moment. After his final lesson of ‘Oneness’ his understanding was complete.

On his way back to Clown Park he had to cope with Busby’s revenge, but also discovered that he had healed the past and broken the bonds of karma.

After touring as a musician with the Three Bears and his brother Oxo, he eventually relinquished his ‘charmhood’ and returned to the Golden Sphere where he truly belonged.

Throughout much of the text there are also inspiring quotations from ‘A Course in Miracles’ included in the appropriate positions.

This item includes FREE Conscious Connected Breathing (self rebirthing) mp3 download.  If buying the paperback version, or the download from another site, please contact me via the contacts page to receive the free mp3.

If buying from an one of the above please contact me for  the FREE mp3. 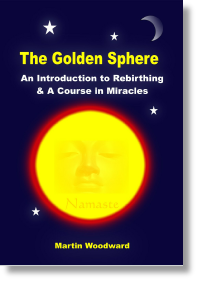 IMPORTANT: After payment is complete click the BACK TO MERCHANT button where you will be redirected to where you can download the guide instantly!